MY FATHER’S PEOPLE COME FROM the province of Shandong, China, and he was born in Shanghai.  My grandfather taught chemistry and spoke fluent English, my father taught it briefly before escaping his family at the age of 23. My mother remembers visiting her ancestral home on the border of two southern provinces, Guangdong and Guangzhou, as a child. She grew up on Peng Chau, a tiny island a mile wide serviced by a ferry from Hong Kong. Her father made paper lanterns during festivals and she would sell them on the streets. She was 19 when she arrived in New York and attempted to hail a cab in the Bronx. It was 1970.

My parents met in a boarding house on east Gerrard street in Toronto. They went to college (my mom finishing a diploma in graphic design, my dad dropping out of chemistry at Waterloo) and backpacked Europe and toured the States by bus before buying a house in Ottawa and having me. There is an elm tree in our front yard planted the year I was born. In photos our house looks like it has hardly any furniture. A pair of speakers, a dining room table scavenged from Le Hibou, a famous coffeehouse in the Byward Market that many Canadian poets read at. I like to think that Gwendolyn MacEwen might have sat at it. My mom sewed blue-and-white tablecloths on a teal coloured Singer.

I went away to university in Vancouver. I was on the west coast for a long time. Toronto was the last place I thought I would ever live, so of course I live here now. I finished my long uncompleted English Honours B.A. at York. In between the years I worked at various places (see entries tagged on the blessings of work), including mopping floors, creating paper trails at PEN Canada, misprinting tickets at Tarragon Theatre, and, having at last discovered that I despise trying to sell anyone anything, spent this summer assisting to logistically co-ordinate sandbags and vendors at Harbourfront Centre.

After something like a 9 year writing drought, or more accurately, slow trickle, 2010 has been an astonishing year for me. In the spring I was a participant in Banff Centre’s Spring Writing with Style workshop. This summer I was accepted as an emerging writer with Toronto’s Diaspora Dialogues. I begin my long-postponed M.A. in English and Writing at the University of Toronto. My work is forthcoming in Canadian Literature. Maybe it will be another 9 years before I’m this productive again. On this schedule, you can expect to hear more from me in 2019.

Sometimes I can be found on a sailboat going around in circles off Toronto Island. Sometimes I am swimming laps. I am also fond of trains, bikes, and making meals and then washing dishes and then making some more meals. Come to think of it, I am generally always moving in a kind of a loop, either heading home or getting away from it, or writing again and again about the same things in different ways, a bit like an astronaut tethered and flailing to the mothership, wondering which way is up, and what she should put her faith in. 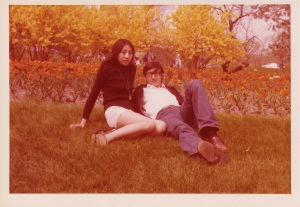 Apollo's sister. A moon off Saturn, a small, sparrow-like bird, once a Titan. View all posts by Phoebe Wang